LOS ANGELES, December 13, 2018 – When non-profit Drive Toward a Cure teamed with Sean Kiernan, family custodian for the original 1968 Bullitt Mustang, in further celebration of the iconic film and cars’ 50th anniversary, it was the start of an all-new movement – one that included nearly a one-gram size paint fragment from the famed vehicle to be placed inside a BRM Chronographes watch for charity, valued at more than $35,000. And all to support the very ailment that claimed Sean’s father Robert E. Kiernan Jr.’s life – Parkinson’s Disease. https://www.drivetowardacure.org/bullitt-paint-chip/

Capitalizing on the ‘Year of the Bullitt’ and the movie’s 50th anniversary, Drive Toward a Cure (which grows awareness and funds for Parkinson’s)joined forces with Frederic Gasser, CEO of the America’s for BRM Chronographe, and longtime automotive friend Nicolas Hunziker of Hunziker Designs, who was already aligned with BRM, to create a unique timepiece for charity as a one - time offering. In addition to the paint fragment inside the watch, its dial will be hand-painted under a microscope by Hunziker to visually depict BULLITT 50, and be stored in a specially designed and exclusively painted art box https://www.drivetowardacure.org/hunziker-paints-box/

With the backing of Ford Motor Company, Warner Bros Studios and Chad McQueen, Drive Toward a Cure – the non-profit that raises funds and awareness for Parkinson’s Disease – created a limited fundraiser to honor Robert E. Kiernan Jr., owner of the recently re-discovered 1968 ‘Bullitt’ Mustang through a single charity raffle promotion. Ticket sales for the BULLITT50 chronograph began last October 17th, to coincide with the film’s original release date and will extend through late January.

The film’s hero vehicle, driven by Steve McQueen in the classic Warner Bros movie thriller and known for the most iconic car chase in movie history, has been owned by the Kiernan family for 44 years and has been on a nationwide tour since last January.

According to Deb Pollack, founder of Drive Toward a Cure, the ability to host an online raffle for the 1-of-1 timepiece at only $25 per entry, is capturing the hearts of a broader audience while increasing donations and awareness for the cause. Each $25 donation on line at www.drivetowardacure.org/bullitt will be entered in the raffle, with an anticipated winner to be announced during the Grand National Roadster Show in Pomona, Calif., on January 27, 2019, when the original Bullitt car will be displayed and its owner will name the raffle winner. Only 1,968 tickets will be sold, to raise a near $50,000 for Parkinson’s. 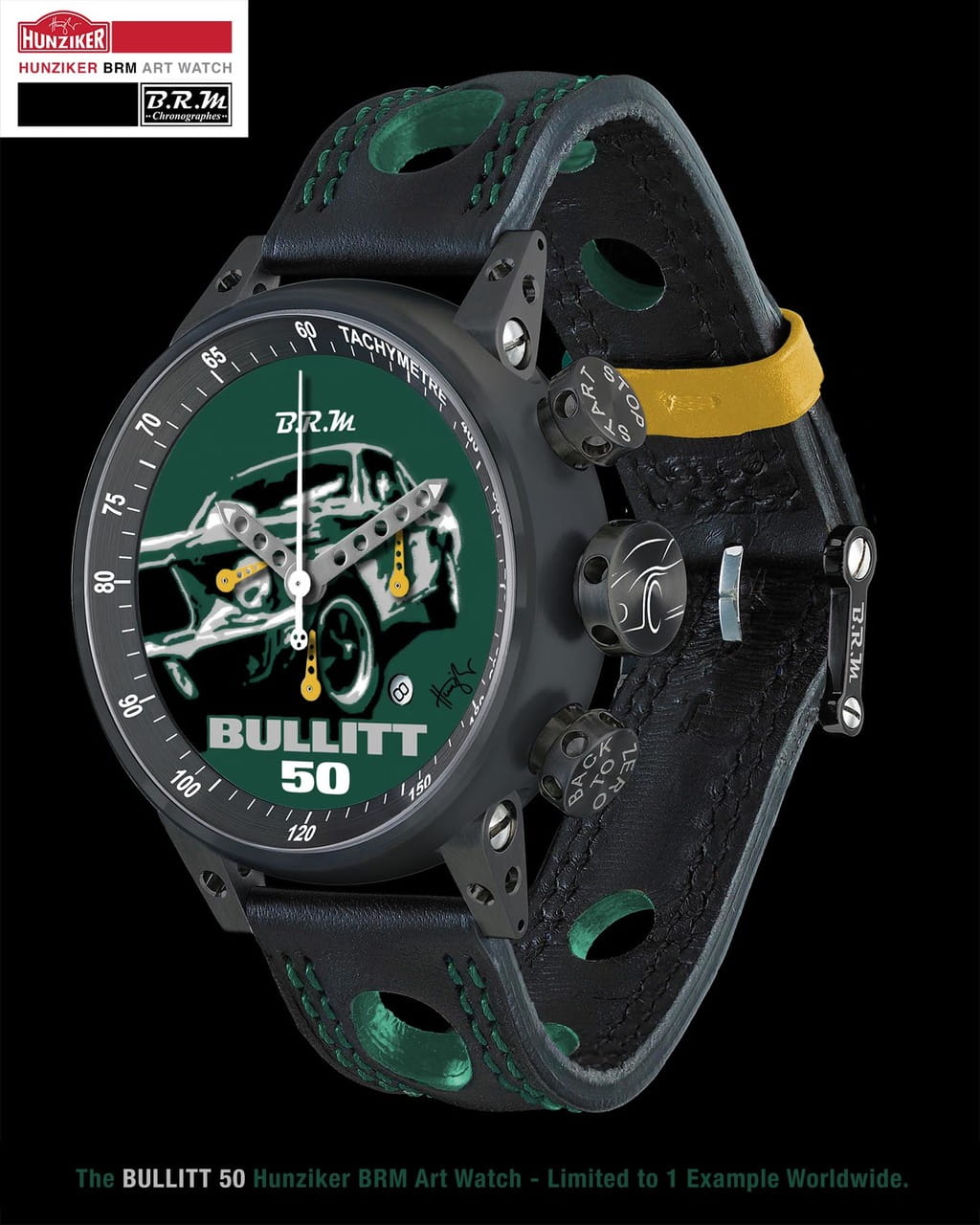 • Chronograph-automatic
• 46 mm case made of one bloc of Fortal HR (aluminum)
• Screw down crown
• Hand painted dial by Nicolas Hunziker
• Limited edition: One off
• Crystal sapphire front and back
• Manufacture and Assembled by hand in France
• Water resistant to 100 meters
• Warranty 5 years

“Our mission for Drive Toward a Cure has always been to broaden the awareness of, and raise funds for, Parkinson’s disease – and all by blending cars and camaraderie,” said Pollack. “When Sean and I first met, we realized we had more in common than cars – as we both had struggled through the loss of a parent to Parkinson’s – and the timing of the attention his car was receiving this particular year offered a perfect pathway to gain the further attention this disease deserved.”

About Drive Toward a Cure:

The Drive Toward a Cure program pursues an alternative to the numerous ‘for profit’ rally driving programs through the creation of events that team cars and camaraderie to raise funds in support of the challenges of Parkinson’s Disease, benefiting research and patient care. Drive Toward a Cure is a 501 (c ) (3) non-profit, with events that are carefully designed to provide a premium experience while raising much-needed funds to continue the search for a Parkinson’s cure, through beneficiaries The Michael J. Fox Foundation and The Parkinson’s Institute and Clinical Center. For donations, sponsorship and event registration, please visit www.drivetowardacure.org.

Parkinson’s Disease (PD) is a chronic and progressive movement disorder, meaning that physical symptoms continue and worsen over time. Nearly one million people in the US are living with Parkinson’s disease. The cause is unknown, and although there is presently no cure, there are treatment options such as medication and surgery to manage its symptoms.

*Your ability to take a tax deduction depends on your tax situation. Please consult an accountant.

MEDIA NOTE:
To access the text of this release, images, and other media information, please click on our media center button below. When an image is scrolled over and displays an ellipsis button in the right corner, that image is able to be shared to social media.

Drive Toward a Cure for Parkinson’s Disease